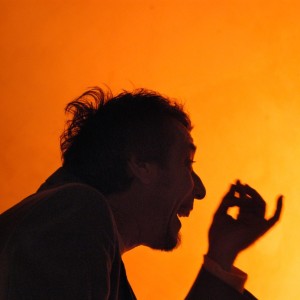 Voice becomes theater, theater becomes dance and music. An actor on stage – Antonello Cassinotti – and his BARE voice: a sequence of vocal tableaux, harmonic singing, kargiraa, xoomij, high notes and high tones and techniques as a vehicle to free the voice from austere conventions; vocal sounds that do not listen the laws of harmony but embody our animal nature, our mysterious essence, the one that is located south of the soul … that area that is … childhood and primordial … urgency.
A show from nowhere where the theater is before the theater and after any attempt to narrate anything, trying to transmit the imperceptible.
A abstract show of vocal dance where the drama of nonsense makes sense following a creative path.
Each scene has a title, perhaps it is simultaneously a concert enriched with theatrical essence that allows few blinks and to the most sensitive a means of interpretation.
Voices without words for a surreal cabaret and a poem without burden,
Voiceless voice that freely dances in a surreal and joyful interlude,
Voice that gives voice to the words /poetry redefining them in resounding terms while trying to transform them into poetry of
Making
and finally …
a small scenery that sends the sense in short-circuit through an ironic sound game of rhythm and vibration.
Let’s listen … and at the end dance
Convey the voice in digressive tones where is the body “inside” that plays and dance and perhaps allows a more direct communication to the more sensitive human.
Hearing a song or a voice, our response is complete, natural, emotional, mental and spiritual because the resonance arises from the uniqueness of the body, mind and spirit.